Peri-peri chicken livers recipe is a very quick and easy to prepare meal. The meal is very nutritious and low budget. It has a great taste too.

The ingredients required for its preparation include butter, clean and well-trimmed chicken livers, peri-peri sauce, juice of lemon, cup cream, salt and pepper, chopped parsley, and crusty bread to serve.

To prepare peri-peri chicken liver the first step is to melt the butter to make it liquid in a very hot pan, then fry the chicken livers until it shows a golden brown coloration on its two sides. Add garlic and peri-peri sauce to the frying chicken livers. Let it fry for a few minutes until the aroma is all over. Add lemon juice and your cup cream. Season it with salt and pepper then leave it for about another 4 to 7 minutes. Your chicken liver is ready. Serve with crusty bread.

This chicken liver recipe is prepared by mixing up the chicken livers with flour and searing it fast on the outside so as to make sure that the inside remains tender. The onion which has been fried earlier on in the oil adds an extra taste or flavor to the chicken liver.

Ingredients needed for the fried chicken liver with onion include the chicken liver, all-purpose flour, the onion, and light olive oil.

The first step is to rinse the chicken liver with pure water then drench it in milk for about 2 to 3 hours to aid the removal of the metallic taste. Pour a cup of all-purpose flour into a container and dredge the chicken liver in the flour and remove the excess. After this has been done rinse away the milk with after. Slice the onions and fry it in oil till a golden coloration can be spotted in the oil. Then take away the onion from the oil with a perforated spoon. Add the dredged livers to the oil and fry it in batches to avoid overcrowding. Do not overcook fry about 2 to 4 minutes per side. Never cover the pan completely so that the surface will not become crispy. Mote that overlooking the liver will make it have a chalky taste. Serve your fried chicken livers on bread and place the onions above the liver. 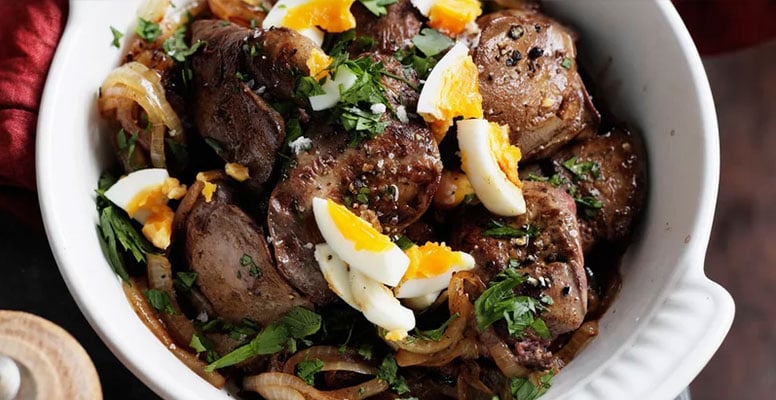 The combination of caramelized onion and Madeira tastes great and makes an impressive sauce for use in chicken liver spices.

To prepare, heat the oil with medium heat and add onions, salt, pepper. Cook the mixture by stirring continuously for about fifteen minutes till the onions turn brown. Remove the onions, put the livers in the pan, and fry till it is brown. Take the chicken livers away from the frying own and lay them on the onions. Add Madeira to the pan and heat scrap the bottom to remove any brown bits. Out the sauce over the chicken livers and the onions then top it with egg and parsley. Serve and enjoy your meal.